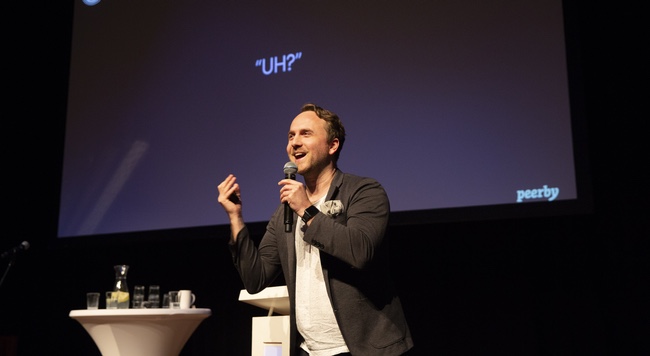 How might we regenerate the earth by utilizing technology to apply circular economy and sharing economy approaches? Daan Weddepohl is a serial entrepreneur. He is the CEO and founder of a website and app called Peerby, which has active members all around the world. Through Peerby, you can borrow, share, and rent out household items in your neighbourhood. Peerby members create social capital, vastly reduce environmental impact, and invest in their local community.

In 2019, Daan’s book was published: ’99 redenen om te stoppen, en toch door te gaan’ (99 reasons to quit, and to continue anyway). In this book, he explains what he encountered on his journey as entrepreneur and how he dealt with it.

Before Peerby Daan worked as a CTO, project manager and software developer. He has also been an actor and he played in several television series and commercials as well as in the theater. His theater training makes him a very engaging speaker. He has spoken at many conferences and events, including TheNextWeb, the Guardian Activate London Summit, OuiShare conference, Sitra’s World Circular Economy Forum, and is a regular guest on The Netherlands’ Business News Radio. Daan’s talks center around general technology trends, the Sharing and circular economies, sustainable entrepreneurship, innovation, startups, lean start-up methodology, and how to work as an agile team.

Daan is alumnus of the Founder Institute, TechStars London, and Rockstart accelerator. He also won a prize in the Postcode Lottery Green Challenge, an international sustainability competition, during the Clinton Global Initiative in 2012.