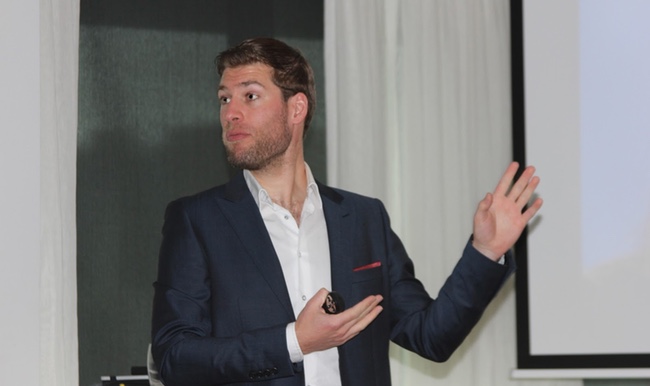 Dr. David B. Nieborg (1980) is an expert on games, gamification, social politics and digital platforms. His goal is to translate the latest insights on these subjects from academia to the world of government, business and NGO’s, and vice versa. With this goal in mind he frequently appears on radio and TV, in print media and online, both as journalist and interviewee.

David is affiliated with the University of Toronto where he leads a research project on The rise of the “app economy”. He previously worked at the University of Amsterdam, the Massachusetts Institute of Technology (MIT) and the Chinese University of Hong Kong. In addition to his research work, David wrote for Dutch quality newspapers NRC Handelsblad and Nrc.next and he advised governments, start-ups, non-profits, educational institutions and various parties in the public sector on the rise of the platform economy.

David presents on a range of topics, for example:

Games and the game industry
The game industry is continuously changing and is at the forefront of developments when it comes to finding new revenue, technological innovation and appealing to a wider audience. Why do games like Candy Crush, Pokemon Go and Minecraft grow so rapidly? And what lessons can be drawn from an industry that continues to grow and constantly explores the limits of technology while shifting these boundaries? In his lectures David draws from his own research and hundreds of newspaper columns on the unprecedented successes in the gaming industry as well as the epic failures.

Gamification
As the co-founder of an Amsterdam gamification start-up, David advised companies on how to generate engagement through game design principles. Gamification can give a boost to a companies’ digital strategy, recruitment campaigns and conversion campaigns by involving customers in a sustainable way. According to David: “In the 21st Century, every company should have a ‘Chief Engagement Officer’ in addition to a CTO and a CMO.”

Platform markets and companies
The rise of Internet giants such as Facebook, Airbnb and Uber are not to be missed. These companies have two things in common: they are all business platforms and they are excellent at integrating their platform with social and especially mobile platforms. Their exponential growth is often achieved without the use of traditional marketing tools. How can we explain this growth? For policy makers, entrepreneurs and educators, it is increasingly important to understand the technology and economics of digital platforms. David’s international research on Apple, Facebook and apps such as Candy Crush is essential for any long-term vision on the digital economy.

Digital Campaigns
As a veteran of Obama’s presidential campaigns in 2008 and 2012, David has a unique insight into the workings of digital campaigns. He regularly talks about his adventures in Florida, Ohio, Massachusetts and Virginia. During his many travels through the USA he spoke with campaign workers, candidates, scientists, journalists and consultants. There are a lot of learnings from these campaigns: not only in the field of social media, but also in terms of (voters) mobilization, fundraising, big data and the relationship between “old” and new media.

David’s strength is to share his enthusiasm about social media, virtual worlds and games in a no-frills fashion. Drawing on his own experiences as an academic and a consultant, his talks offer an engaging and accessible pathway into the world of new media. He gave keynote presentations at national and international conferences, companies and events, and for a broad variety of people.

“David is an inspired person who can also inspire other people. I listened for 45 minutes to David about the community strategy that Barack Obama used on his election campaign. I’m sure I could easily listen for a whole afternoon. So when you need a enthusiastic speaker on this subject, don’t hesitate to ask David.”
–Deddy Dorenbos, October 2010