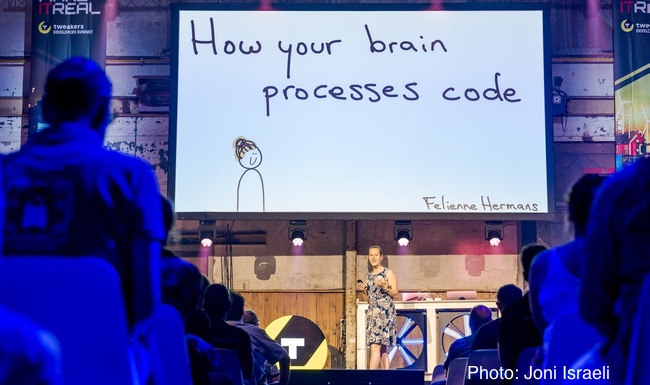 Felienne Hermans works at the intersection of computer technology and human thinking. When she started teaching programming to children, it turned out to be more difficult than expected. To better understand how to teach programming she immersed herself in cognitive science: she made it her research topic and wrote a book about it.

Felienne is Professor of Computer Science Education at the Vrije Universiteit Amsterdam and teaches programming one morning a week at Lyceum Kralingen in Rotterdam.

She obtained her PhD in 2013 on detecting errors in Excel sheets, which eventually resulted in the startup Infotron.

She then turned to programming for children. From 2012 to 2018, she hosted the Joy of Coding conference. In 2020 she developed the Hedy programming language. Hedy has grown into a worldwide open source project that has been translated into 27 languages, it is used worldwide in hundreds of classes and now even Guido van Rossum, the creator of Python, is convinced of the added value of Hedy.

In 2021 she won the Dutch Prize for ICT research.

Felienne hosts the SE radio podcast, one of the most popular software podcasts on the web, she sits on the board of I&I (the association of computer science educators) and is a member of TC39, the committee that develops JavaScript.

She also blogs on felienne.com and writes columns for AG Connect and for Dutch magazine De Ingenieur.

Felienne talks about the importance of programming and on how to programme. She also speaks about the meaning and role of AI, software and open source in society and in science.

For a technical audience, she talks about Hedy’s technical design: for example, about making programming possible without much syntax, or about implementing programming in Arabic, Japanese or Chinese (both are unique features of Hedy). She also talks about managing large international open source projects.

Felienne gives workshops and can also be asked to chair or moderate panels.

What happens in your brain when you program (target group: programmers)
Programmers know a lot about code but not always a lot about people and their brains. Not so handy if you’re making software that also needs to be understandable. In this session Felienne Hermans explains how your brain processes information and how those principles can be applied to reading and writing code. Do you want to read and write code even more effectively? With a better understanding of cognition, we certainly can.

Hedy: a graded programming language for children (target audience: education)
When children learn to code, they often start with an accessible block language, such as Scratch. If they want to progress, they usually want to switch to a text language such as Python, but these are often still too complex for the age group 10 to 14. Felienne Hermans therefore developed the programming language Hedy, which forms a bridge between blocks and text. Hedy is now used by thousands of teachers in their classrooms worldwide and has been translated into 29 languages. In this session Felienne explains how she came up with the idea of ​​Hedy, how it works and how you can work with it yourself. After this session, you, as a teacher can also work with Hedy in your class.

Hedy: a graded programming language for children (target audience: programmers)
The same presentation as above, but this presentation is focused on programmers. In this session, Felienne explains how she came up with the idea of ​​Hedy, and how she built a textual programming language that has little syntax and works in Arabic and Chinese, among other things. That is easy and user-friendly for children but a complex technical challenge for programmers.

The impact of software on various fields
Software is becoming increasingly important in all fields, from booking a hotel via Airbnb to getting your groceries delivered quickly to your home with Gorrillaz. This impact actually plays a role in all fields, from healthcare to education and from transport to energy.
But what exactly is software? How do you make an app yourself and how complicated is it? In this session, Felienne explains the basics of software, from the zeros and ones to artificial intelligence and machine learning. After this session, you will have a better understanding of how the digital world works, how you can learn more about it yourself, and how it is relevant to your domain.