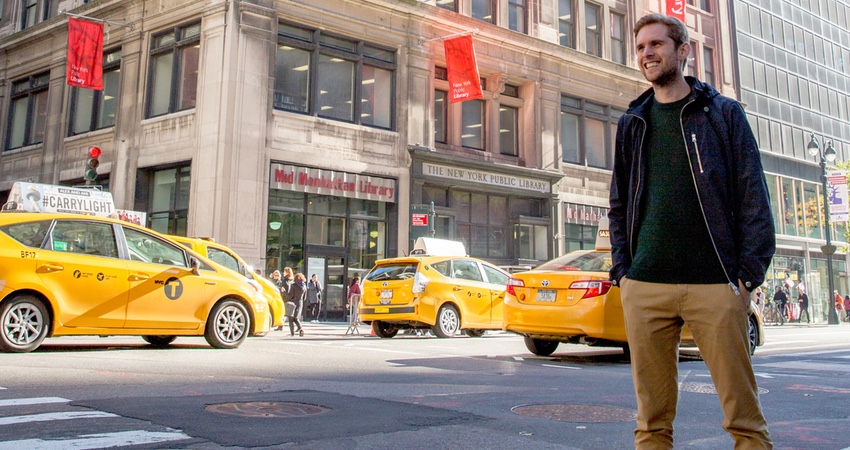 Rens Lieman is a technology reporter for Dutch newspaper NRC Next and Esquire magazine. He is the author of the recently published book Uber voor alles‘ (Uber above all), a book about the on demand economy.

In his book, Rens tells the story of how Uber conquered the world and created the so-called on demand economy. With online services such as Uber, Deliveroo and Handy, consumers can order whatever they want, whenever they want it, by just by tapping a button on their smartphone. Rens outlines how these large technology companies reshape our labour market, economy and even our cities. As part of his research, Rens worked for almost a year for Deliveroo and Uber, allowing him to offer a unique behind-the-scenes glimpse.

The book is well-received in the Netherlands. Dutch newspaper Het Parool called it ‘a comprehensive and well-balanced book on a very newsworthy subject’. Dutch national radio broadcasters like Radio 1 and BNR covered Rens’s book, as well as national newspaper NRC, Esquire magazine and many other Dutch and Belgian publications. The first edition sold out within two weeks.

Rens speaks about various subjects related to the on demand economy:

What’s it like to work for an app?
Rens looks back on his own experiences as a bike courier for Uber Eats and Deliveroo and as a cleaner for Helpling. As it turns out, it’s a new way of working. The apps took on the role of boss. They told him what to do, where to do it and when to do it, as well as how well he did. Rens talks about how behavioural economics and gamification were continuously used to nudge him in the right direction. Furthermore, he explains what it’s like to work without colleagues and how it is when the city becomes your office. In his keynotes, he alternates between his own – often amusing – experiences at the micro level, and critical observations on the on demand economy at macro level.

Ubers magic box of tricks: how come there’s always an Uber driver near you?
Platform companies such as Uber and Deliveroo constantly have to balance supply (drivers, couriers) and demand (passengers, hungry customers). But technically, they can’t control either one of those groups. They can’t tell you when to order a cab, or instruct a driver when to work. So how come there’s always an Uber drive near when you need one? Uber has mastered the field of behavioural economics and uses the tricks it learned from the video game industry. Rens can outline a bunch of these fascinating tactics.

How does the on demand economy (Uber, Deliveroo, Handy, Airbnb) affect our labour market, economy, cities and behaviour?
Just like Facebook and Google, Uber impacts our everyday life. The ‘Uber model’ can have both a positive and negative effect on our public goods. The labour market, for instance, has become more accessible because of on demand-apps, but will it lead to economic growth? How will cities change when the self driving (Uber) car becomes mainstream? Will car ownership decline if Uber becomes cheaper and more accessible? Will we be happier as citizens when we can have anything delivered to our home?

Rens studied Journalism in Utrecht and landed a job as a staff writer at Esquire magazine after graduating in 2011. In 2015, Rens moved to New York. Since then he’s been working as a freelance reporter for several Dutch newspapers (Het Parool, NRC) and magazines (Esquire, Nieuwe Revu, Elle). Rens focusses on technology companies and how Silicon Valley affects our everyday life. In 2018, his first book, Uber voor alles, was published by Business Contact. Rens currently lives in Amsterdam.